It’s with a heavy heart that we have to report that this evening one of our favourite hotels not just to photograph but to stay at as a guest was tonight ravaged by fire. Prior to posting we’ve messaged our friends at The Address Downtown Dubai to ensure they’re safe and well following the fire that tore through the 63 story luxury property. 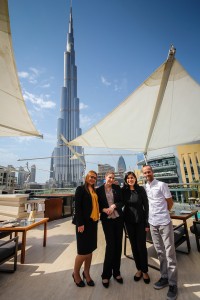 My first encounter with The Address Downtown came in 2011 when, like most people I came to visit the adjacent Burj Khalifa and Dubai fountains for the first time but it wasn’t until March of this year (it’s still 2015 at the time of writing) that I met with the team at the hotel to photograph their Google Views virtual tour for UK based luxury tour operator, Destinology. Since then we’ve remained in touch and became good friends with members of staff and in regular contact over social media and had even arranged to reshoot for StreetView trusted in the coming months.

According to reports from Dubai’s Media Office the fire originated on the 20th floor, this suggests that it started in one of The Residence rooms or suites similar to the one depicted in the Google Street View tour above, while we’re awaiting more details on what exactly happened and how severe the fire damage is we can only look back on what the hotel looked like previously in the hope that it can be restored to it’s former glory in double quick time.

TADD was the first and only Emaar property to be photographed by the Google cameras, while other hotels (The Address Marina Mall and Montgomerie Dubai) within the group which recently won ‘Best Hotel Chain in Middle East‘ for the third year running were due to be shot at the same time we unfortunately didn’t receive the permits and so the upcoming Street View Trusted photo shoot for the flagship property was to open a new chapter as we embark on an ongoing relationship with the global developer.

We’ve sent our condolences to our contacts at the hotel and offered our support in providing direct links to the different areas within the Google virtual tour as well as the original high resolution photos which could act as a visual record of what was lost in the blaze, while we wouldn’t class this as a secondary use of our imagery we are glad that we are able to help our friends at The Address Downtown at this difficult time.

As part of our comprehensive virtual tour, our interactive 360 imagery is to focus on not only accommodation categories, you can also explore other areas of the hotel which still smouldered as the clocks stroke 12 o’clock beginning the traditional firework bonanza across the emirate.

Explore Lobby & Mezzanine Levels of The Address Downtown Dubai with Street View Trusted as photographed for Google Maps by See Inside photographer Dan Root, click and drag to look around and use the navigational arrows to walk to Zata, Cut by Wolfgang Puck and Fazaris. You can also access other areas directly such as Club Lounge, Cigar Lounge and Neo’s.