Here at See Inside Group, we’re always looking for cool and creative things to capture in 360 and to add to Google Maps so we teamed up with the guys at Caliber Interactive to launch PokeView, a fun virtual reality experience based on the brand new augmented reality game Pokemon Go.

Gotta Catch The All!

If you’re not quite up to date with Pokemon Go or you don’t know your Pikachu from your Pidgey, where have you been? Even though it’s not officially launched in the UK yet it’s taking the world by storm. Through user reviews from those in the US and Australia where roll out began last week it’s caused desperate fans to sideload the app here in the UK and other areas around the globe all desperate to catch the illusive fictional creatures.

No you’re not stuck in a timewarp, the same game with same concept is now back in the digital age to release your inner child. The game is believed to be having many a positive effect as parents who were fans of the original Pokemon generation are now teaming up with their kids, users are reportedly getting much more exercise than normal as they venture out into the world to catch Pokemon and visit the various Pokestops and gyms, it’s also driving footfall into local businesses where users are finding rare breeds of the characters.

Of course this level of hype was to much for us to ignore and we expect many brands will jump on the marketing bandwagon soon.

By revisiting an old StreetView | Trusted virtual tour we created for Digital Marketing and SEO company Caliber, we superimposed a handful of animated Pokemon Go characters, spread around the offices.

Explore the Caliber and See Inside Group offices on Google Maps on desktop, smartphone or in virtual reality to hunt down the likes of Pikachu, Squirtle and Charmander. 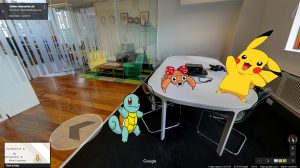 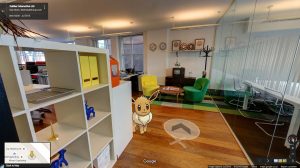