The See Inside Group prides itself on being a part of the community that we service. Joy Caasi, from our Dubai office via Caliber, who just so happens to be a local social media celebrity of her own, participated in several Instameets in the UAE where she had the chance to showcase Google Cardboard to notable bloggers and Instagrammers.

On an Instameet in the Emirate of 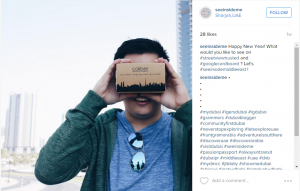 Sharjah (#SHJsoul ) hosted in preparation for the launch of a project called Sharjah Scene, we were able to showcase a number of sites on the Street View app and a few interactive applications that take 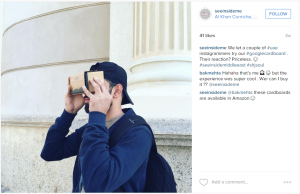 advantage of the Google Cardboard platform.

The Sharjah Scene project is about showing the real Sharjah, bringing communities together, making Sharjah an attractive destination, in essence, explaining Sharjah in a better way and at the same time promoting the economy in Sharjah. It is a great means to show how the economy is changing in terms of start-ups and small, medium and big businesses.

The See Inside Group has long held the view that destinations such as Sharjah, have an opportunity to open a window to the world via tools such as Street View Trusted. We’ve been in touch with the local tourism authorities to see how we can do our part to promote this place that holds a special place in our hearts.

Beyond the Sharjah Instameet, we have reached out to notable social media personalities who have been kind enough to share their reaction of utilising Google Cardboard.

We’ve shared a few below, thank you for everyone for sharing your feedback with Google Cardboard.

Wonder if I can go through with this. We’ve been playing with #cardboard since we got it from our friends at @caliberi. I also get a kick at watching my friends use it coz they really look silly. 😂 I downloaded the #GoogleStreetview app as well and it’s amazing! Thanks #googlemiddleeast and #caliberi . . . #vr #virtualreality #google #cardboardvr #abmeloves #abmetech #mydubai #uae #uaebloggers #dubaiblogger #igersdubai #instaphoto #instadaily